Happy New Year 2011! It was the 1st day of the year, and this trip was postponed since last November 2010 :) It was a 9D8N trip, nothing special except anticipating the cooling weather. Unfortunately, I was down with cool right before the trip... there goes my joy! Having to roam around the cities under 10C most of the time was not a good experience, a mask was my friend most the time... (*cough cough*)

Day 1 - We arrived around 8pm at Taipei Tao Yuan (桃园）airport, thanks to the greatest mistake I made without confirming my air ticket earlier... Enrich managed to book me for a direct flight to Taipei without a fee. The greatest experience the night was the hunt of our hotel. Taipei York, a budget or so call homestay type in the center of XiMenDing (西门町), the fashion district.

Day 2 - Out from Taipei, caught the new Highspeed Railway (HSR 高鐵) to TaiChung (台中) with NT700/pax per way. It wasn't cheap, but it was so convenient for 1 hour ride. Nothing much to venture at TaiChung. Following a book guide, we took a bus (客運）to Sun Moon Lake (日月潭), another tourist spot.

Enjoy the public transport ride most, it is all well integrated. Along the way, there are lots of 檳榔樹. At the road side, they are booth with 槟榔妹, I still don't quite get what would that mean for, hm...

Other than that, Taiwan especially the middle towards southern part are consider as fruits heaven. I saw huge apple custards (my favourite) and some fresh jujube (蜜棗), I love it so much!

Before hitting the 830pm train back to Taipei, we took another bus ride to a town center (can't recall the name), and ventured their night market. Oh yes, night markets are very famous among the Taiwanese, there's where you could get most local delicacies. But, you may end up with some not-so-promising one, if it is not highly recommended by various tour advisory book. 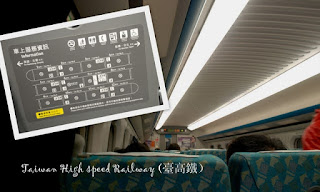 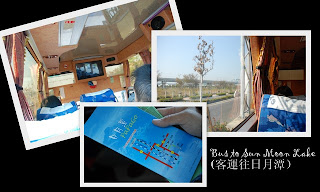 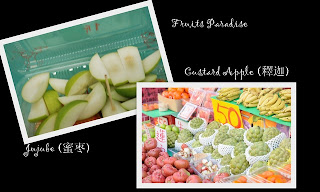 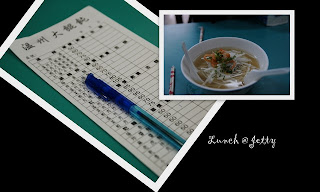 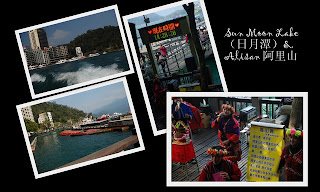 Day 3 - Let me think over.... guess it was a rainy day. We decided to change plan a little. Instead stay within the city center for shopping!

Breakfast is essential! We headed of for a quick westernized breakfast opposite our hotel. Not bad, as I noticed there are many customers every morning. 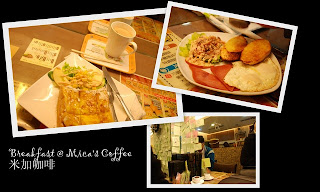 Commuting with MRT (臺鐵) is always ever easy. Taipei 101 tower & its surrounding shopping malls has been a must. Oh, and by the way shopping for Taiwanese Chinese books is always been a great pleasure. The varieties are far more than Kinokuniya here in KLCC. I had shopped a few, the only limitation I had was worrying my luggage space.

Food wise, I craved for ramen that afternoon. Night, we earlier made a trip to another night market we have yet ventured before. As introduced by the tour book, we head to WanHua （萬華). The street was rather disappointed, its more like an "old" market. Further checked... it was a red-district area before... no wonder!

Wasn't statisfied with the night market, we then made a another trip to the famous night market, ShiLin (士林) which we had ventured 4 years ago. Huge fried chicken (雞排) is famous, *drool*. It's just another night market a.k.a. pasar malam we have here in peninsular Malaysia. Only difference is walking through with nice weather... it had been so soothing nice! 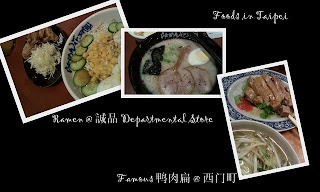 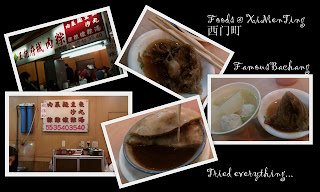 Day 4/5 - It was still drizzling, but no choice. We have to continue our journey. This was the time we supposed to go outskirt from the city. Took the normal train, hit on the journey towards RuiFang (瑞芳). We didn't buy ticket in advance, so... it is just a matter of waking up early or late (I like this... as I could enjoy my sleep well, unfortunately it wasn't too good for a 'schedule-oriented partner :P). That was why we ended with lunch, instead of breakfast at the main Taipei Railway station. hehe... Me, I was craving for minced pork rice (滷肉飯). You can get one at the foodcourt at the train station, simple & easy. 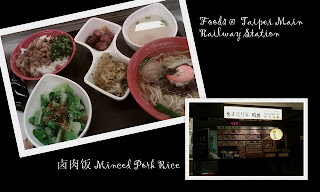 Train journey towards RuiFang was not bad. It's a small town. If not mistaken, I lately watched a Taiwanese series that mentioned this place. 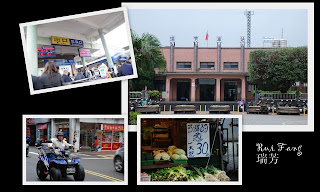 Our destination was JiuFen (九份) instead. Another tourist spot, at the hilly site that overseas the tip harbour of Taipei, JiLoong (基隆). It rained throughout the day. We checked into a homestay, and mind it... it was only 2 of us that bloody 2 nights. The owner was good, he still served us breakfast every morning. Unlike our previous trip to HuaLian (花蓮) over the spring/summer period, there were many tourists whom we could get to know each other.

Anyhow, staircases been everywhere within the hilly town. So, it is impossible to avoid steps, you gotto walk and climb the stairs every now and then. Old streets has always been tourist attraction place, JiuFen old street (九份老街) has all the shops like other tourist spots... we walked, watched and observed. Without fail, food is a must. I like the taro (芋頭圓) very much, a soupy of dessert served with round little balls made of flour and sweet potatoes and taros. 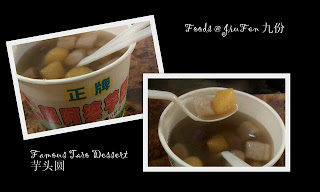 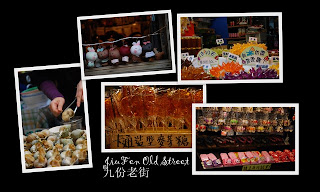 We had an expansive dinner within the old street on the 1st day of JiuFen. The restaurant was rather unique - old & shabby is the word. It retained the olden days feel. I remember it was cold that night, when we were the only 2 person sitting at the dining hall, I felt eerie... it was a cave styled, with even an old tree surviving itself within the restaurant for century! Thank god, few more couples one from Hong Kong another from Japan actually joined us a while later. The food was good but pricey. 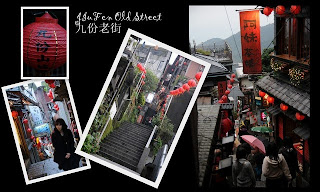 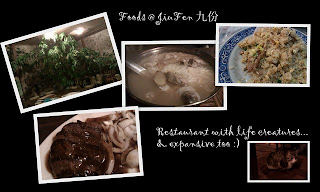 JiuFen & its surrounding area was Gold mining area century ago. It's a gold town, and thus they have own gold muzium we visited the following day. Taiwanese has good relationship with the Japanese during WW2, there were Japanese influenced in the lifestyle of hostels around, which the authority had maintained it well in order to preserve its structure and made it a tourist attraction or education tour for their school kids.

No pictures to share, as it had been mainly my portrait pictures taken around. :)

Day 6 - Made our way back from the hilly area to RuiFang, by bus. We stayed around for some local foods from a hawker center nearby. I like the siewpao... nicely oven backed. 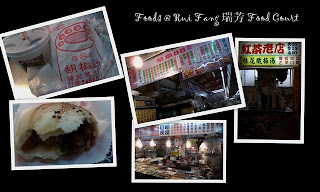 We then hit the train to another few stops before heading back to Taipei. Took the normal train towards ChingTong (青銅), another place which I remember watching on Taiwanese series, nice and peaceful place with lots of bamboo plates hung up for making wishes, if I recalled correctly. We didn't get ourselves there, due to the limited train frequency, worry that we might not able to catch the right timing back to Taipei.

We stopped at PingXi （平溪）& ShiFen (十份). Both place are scenic. ShiFen has its town separated by the railway road, we gotta cross the road whenever there is no train. We flew a wishing lantern over from the railway too (it is legal there), while it was even much famous over the last day of CNY. 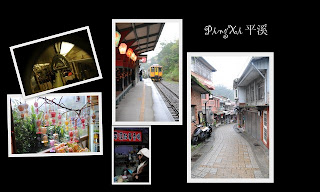 Day 7 - Hot spring day! Before headed to WuLai (烏來), let me describe a little about breakfast within XiMenDing. It is not easy to hunt for breakfast, as I noticed people here are basically nite-owl (夜貓子) where they don't wake up early.. demand for breakfast is practically low. We have to bare ourselves with fast food. A Taiwanese fast food JSP is rather good. Power breakfast! I had their pork burger + coffee for 2 days in a roll! 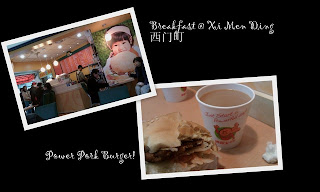 Alright, the journey to WuLai was by MRT, stopped at XinDian （新店) and could catch a public bus to WuLai. Again, journey is so much easy with public transport.

There are many room-based hot spring hotels (hourly rated). Check out the price here. Alternately you can try steaming yourself over at the public area under the cold cold weather like other locals. 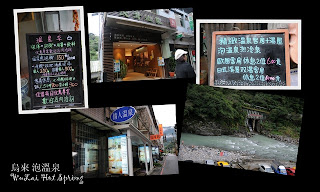 WuLai waterfall is scenic too. But the street was rather empty the time we reached, probably it was winter :( Hot spring boiled eggs are among the local delicacies, I tried one and like it much.

Day 8 - Consider the final day. Lastly was the day for Taipei International Floral exhibition. I expected a long long walk as the place could ended up at least 10KM. It was surprise I could walked for a long period, it was since 10am - 4pm! Distance could be 10KM or more. What drove me nuts like this? Well.. it was the rubber stamped the organizer placed at each exhibition hall. Their stamps were nice and colourfull. Gladly I had a passport sized note book, and I filled them up with the little priceless souvenir - the rubber stamps! if you like this idea, prepare yourself with a little notebook, you could get rubber stamped almost every tourist destination, i.e. train stations, MRT stations and so. 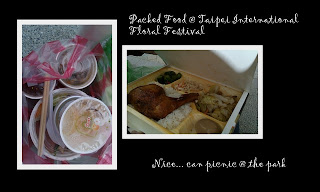 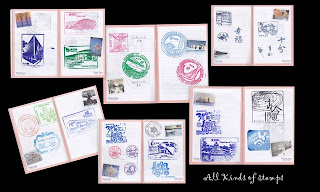 Night, we dragged ourselves to another night market, ShiDa (師大) which is nearby to Taiwan University. It was crowded on a Saturday, probably because it was a weekend. We bought nothing at this market, except some steamed bun for packed dinner. It was not within the market, but shop lot nearby. 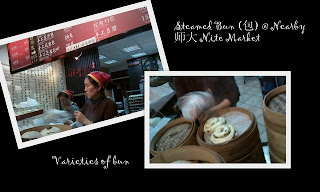 Day 9 - Holiday ended. Finally, on a taxi off to the airport. The taxi driver was rather long winded, and he told me he is getting his tour guide license soon :-|, no wonder. Another eye-opener observation was, his taxi has a cabled TV... it was so fun!

Lastly, we had a transit flight at Kota Kinabalu. Sky was clear that noon, and I snapped the picture of Mt Kinabalu from the plane. Plus, the lagoon area which we enjoyed and had fun just a couple of weeks before this trip to Taiwan. 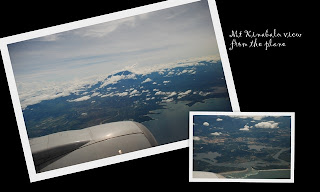 Finally...... it is done. My procrastination had brought me a huge delay to this post. I can now continue with other pending posts over the weekend. Stay tuned.
Posted by Purpledee at 10:21 PM No comments: