Am I addicted to blogging today? Well, I am just in the mood, since I am not distracted by any other house chores, drama, TV programs, or foods...

Presenting you one of my photoshop edition for the birdies recently that hooked onto my bamboo trees, overlooked from my cozy study room window. :)
They can be irritating at times, but most of the time they accompany me with a fresh tone in the morning. Tweet, tweet always... as long as they do not go Angry Birdies.

Posted by Purpledee at 10:33 PM No comments:

I love experimenting with all kinds of bread with my breadmaker. Some recipe was previously shared by friends, while they are all using Kenwood breadmaker. Both had the same breadmaking concept and I find it easy to get along with their instruction.

I missed out some picture on the previous experimental breads. The last before this was a Pandan Pumpkin Seed bread, I like the Pandan smell very much, as it was all fresh from my backyard.

This time round, I experimented with left over Barley (薏米渣), all from the boiling pot for Barley drink. I always find it a waste, to chuck such leftover just like that. Though it usually gets recycled as composite for my plants. It seems ready for bread, but I don't need them all.

For breadmaker user, this is fairly simple.

Place your wet ingredient at the bottom of your bread tray, in order to keep them away from the yeast. While the dry ingredient on top, and finally place the dried yeast cover at the very top of the flour.

Here was how I distributed my ingredient.

Place the tray into the breadmaking machine, I used the standard normal bread. It turned out just nice.
This had been the most satisfied bread I have ever made, it was moist enough, probably due to the fact that Barley was soaked for long time, where it absorb water.

I have yet try to make  bread without help from breadmaker. Will soon find the courage to do so, probably once I get fed up with the experimental ingredient. :)

You are welcome to try this, left over Barley rice still has lots of minerals and fibers in them. Don't waste food.

Posted by Purpledee at 9:54 PM No comments:

Not too sure how many could still remember the olden days cotton wool pillow (named Kekabu in Malay)? Guess those same era as mine might still have the opportunity to see and feel such cotton wool pillow. Still remember those days when my pillows get thinner, mom would need to refill with more cotton wools. It wasn't a good experience after all, when you couldn't control the amount of wool fly around the house. Hence, we usually have to do the refill work in the balcony.

It had been recent years, when I don't feel good with my sleep and experiencing occasional body ache. I have been hunting for various kind of pillow, be it pure feather, memory foam, some synthetic with ginko, etc... Spent quite a sum in getting a comfortable pillow. Till one fine day, I was fed up with all the trial and error, I made myself a traditional cotton wool pillow!

In case you would like to make one for yourself, your toddler or family members. You can always grab the natural wool from in bags from small villages area, i.e. Sg Buloh or Kuala Selangor, for those staying around Klang Valley. Prince ranges RM15-25 per pack.


Unfortunately I wasn't able to capture the actual location of this shop. It stated R10, BT 17 Kampung Merbau Sempak, Sg Buloh. Check out Google maps, may be able to locate it. There are more shops along the way between Kuala Selangor - Sekinchan. Was just able to grab another pack for a friend recently.

On the other hand, cultivating and planting had been such interesting, especially with the species of Tibet cotton, given by its seeds from a friend.


The plant took only a few 2-3 months before it bloomed the first flower and turned into cotton. A Tibet cotton plan is at most 1.5ft tall. Easy to maintain, needs enough sun light, nice flower, most importantly it bear cotton! I may plant more of this at home, at least I have organic cotton wool to spare next time. Will it be possible?

Posted by Purpledee at 3:26 PM No comments:

It happened just this week, when I had my shopping day alone and I passed by Tang's new outlet at One Utama. Saw this a set of elegant necklace on the display, and it immediate reminded me of a Taiwanese fashion drama I watched last year.

According to this local fashion site, Bib Necklace is a recent trendy fashion. Oh dear, I am seriously not a trendy fashionable person at all, but somewhat I am just attracted to nice and elegant stuffs. This challenged me to sew one of this on my own!

Here goes the outcome of my 'creative' handmade product. It seems my creative mindset once stimulated at that particular moment, where I drove myself to a beads and tread shop in Seapark, PJ. It was the immediate afternoon, where I finished the below lace necklace of mine. :)

Counting the years, it had been more than 5 years I do not made my own necklace. Specially those made of Swarovski crystals... 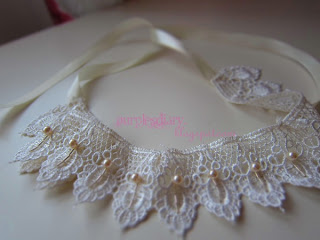 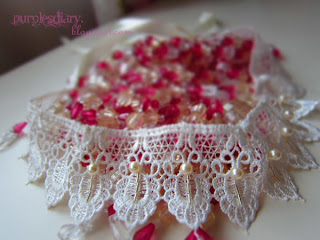 Posted by Purpledee at 3:59 PM No comments:

I had excessive limau kasturi a.k.a. lime available at the backyard, not too sure what to do with them. It came by an idea to make them into jam. Jam which we usually use to make drink or fruit punch.
It had been a good cure for sore throat. Remembered some time ago a friend bought me a bottle of such lime when I had this miserable sore throat and cough. Stir a spoon full in luke warm water, it could ease sore throat occasionally.
How to make them, here are some simple steps :-
Recipes in Mandrin :- 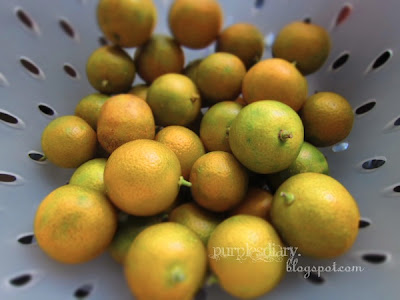 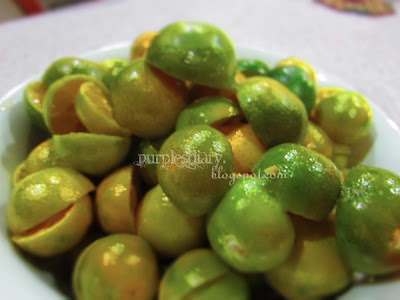 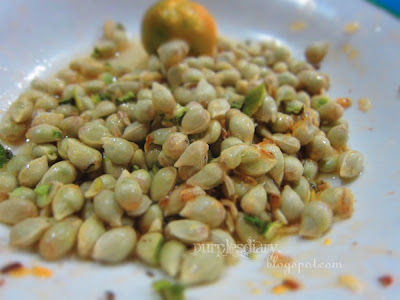 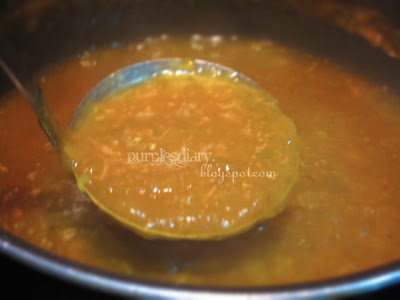 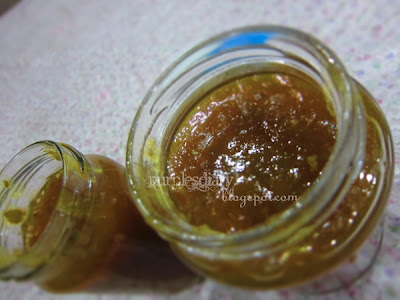 Email ThisBlogThis!Share to TwitterShare to FacebookShare to Pinterest
Tags: DIY

I would not say I am a fan of exercise, though I do drag myself for yoga, belly dance, breeze walking or at times a 10KM walk... True enough, I am a sports freak! I hate exercising ever since I was young, not sure why.
Nevertheless, our fragile human body do need a lot of exercises each day, especially for those whom stay in office work, tied up onto the office chair and computer for at least 8-10 hours a day.
Let me introduce this recent companion of mine, with an advertisement (self explained) below.

Then, here is the real picture of the slim looked Ogawa EZ Thrive. 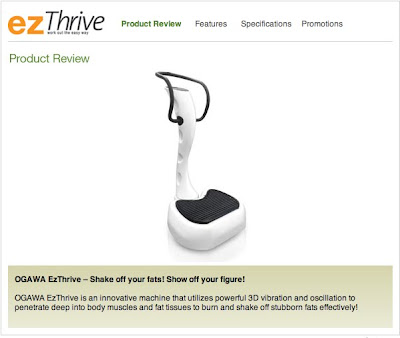 It's such an easy to use machine, much more easier than a treadmill or those static bicycle. Practically does not need any strength or energy to drag you on it. It's just some matter of posture you would need to let the machine massage and burn its fat and calories.
There are couple of ways one could use this machine. By standing straight up, bend some of the knees, siting on it, side way up, and so per mentioned on the user guide. One will find a little burning itchy, if there is fat to burn. Else, it is perfect enough to help with various movements for some part of the body.
Worth it all!

Posted by Purpledee at 10:22 PM No comments:

CNY? Isn't it long time ago? Oh yes, I know this is a dated post. I didn't have much time over the past weekends. Most given to standard weekend house chores, experimental baking and cookings, some other new weekend activities which I had recently picked up. Will blog about them later.
Here been my diary for this year's 2012. Knowing that it will be a though year ahead for me, I had started to adjust my believe mentally and physically came January 2012. New philosophy in my life, kick-started my year with an easy one. Most importantly, it's the believe that I had in the inner me, "看開了".
Made an afford to return home, across the sea last CNY holiday. It was great, being once again back to the childhood home. The beloved Victoria island, as some would say. It was a full filling trip. Met up with my primary classmates, such a mini gathering made us chat throughout the afternoon immediately after touched down the airport.
Lion dance is common too. We will have house to house visit. That's an orange color lion came to my neighbourhood. 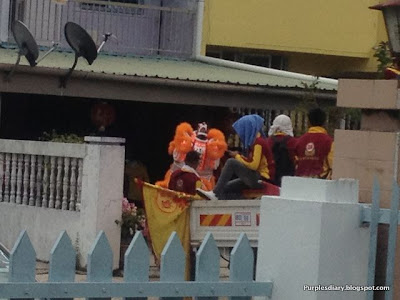 Spent some other days at home. Shopped for liquor, explored many other kinds of beer in town. It was exciting and eye-opener for me, where there had been much more varieties of liquor made into the Duty-Free island this CNY. My favorite Paulaner in barrel! and many many types more. 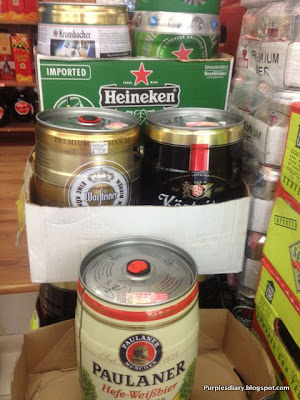 Besides, it was nice to explored some good restaurants while dinner with the family. It had been awhile every since we had our CNY back in the island.
Went through some of my collections, saw this particular cap for my brass-band group during my primary school era. Obviously, that's my school badge! I was a lance copral that time. 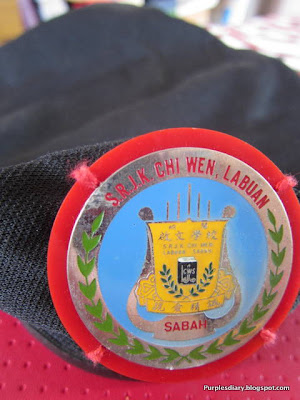 Found some old coins within my cupboard too... 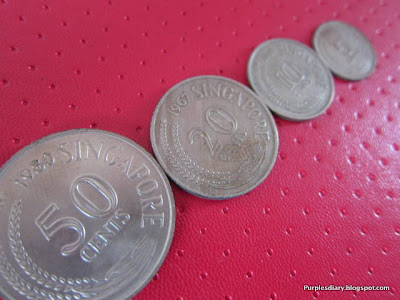 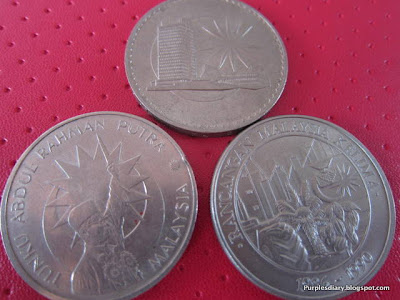 Towards the end of my trip, I finally got the chance to had a road trip from Labuan island to Kota Kinabalu. Purposely bought a ticket return from KK since it was super saver price! Here's the map we travel from the island, via a 2+hour ferry ride to Memumbok. Continued another 2+ road ride on the mainland all the way to Kota Kinabalu. 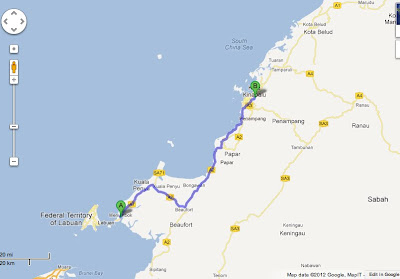 I prefer this ferry compared to the one in Penang, as it has more space to move around. However, according to source the ferry is not reliable. It had been commonly broke down, and passengers would need to source other alternatives, i.e. speed boat to return over to the island. 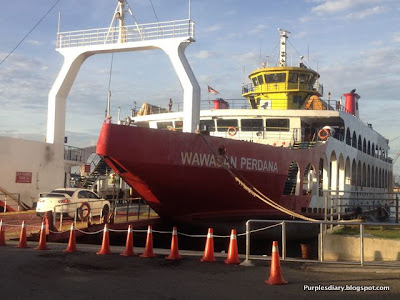 View from Labuan jetty, there are all sorts of ship and barge around the corner. It's an oil & gas island too. 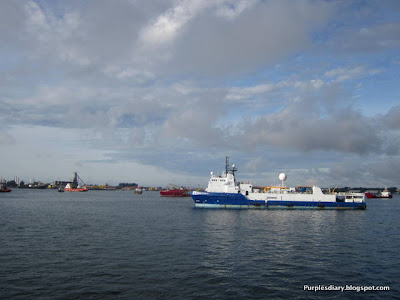 Here's the passenger's corner of the ferry. Upper deck has air-con room for passenger, but I would prefer the open-aired place. 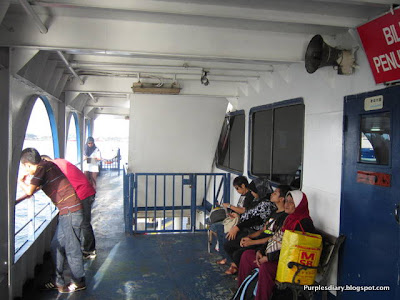 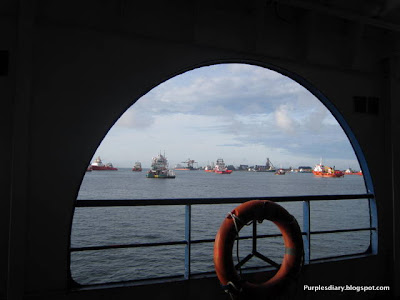 The upper top deck is very spacious and windy... you could get sun tent here too. 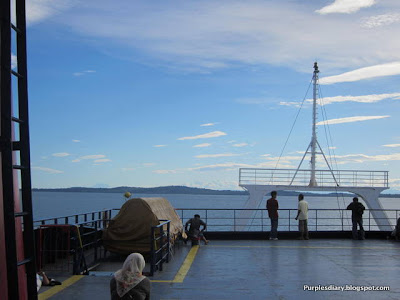 Once settled down at Memumbok, a small remote town over the mainland (the place is certainly much remote than Labuan). We hit the road and move towards another town, namely Beaufort for lunch. 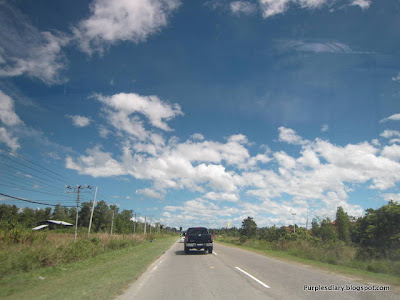 Lunch was simple, we had noodles. Sorry, didn't have the picture here.
We reached Kota Kinabalu around 3pm. Checked in hotel (can't remember the hotel at Penampang), we had a good deal for family room.
Mom introduced us good dimsum in KK, she even compared it with Ipoh's Foh Sang (Uhhh?? Sure or not?). Oh well, tasted them and indeed was much better than the famous one around Peninsular. Had big big siew mai and some other tasty seafood stuffs, i.e. scallop. Mom said the place is usually full around 8-9am. Lucky us as we hit the place around 730am that Sunday morning, before had our Sunday market shopping at Gaya Street. 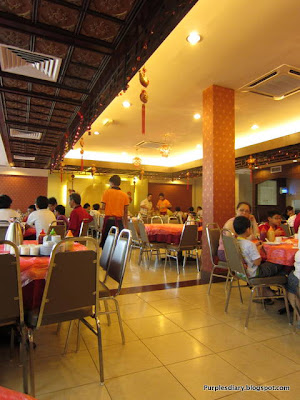 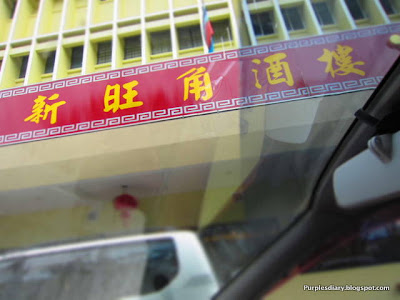 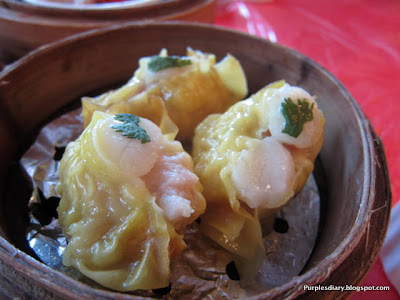 Sunday market is nothing new for the locals, and its a tourist attraction spot too. Without fail, we will packed some Polo Bun! :) Other than that, we had a quick walk around, enjoy the scene of busy Sunday street, didn't shop much too. It was great to have own ride in this town, made out movement ever convenient.
Gaya Street during CNY. 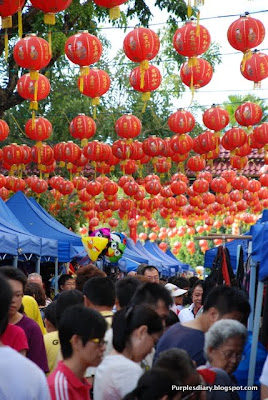 Some traditional musics by the locals. 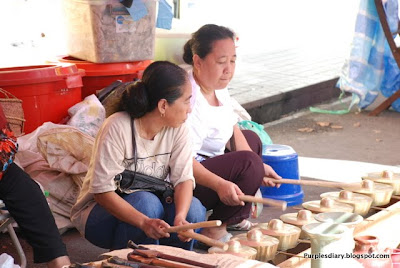 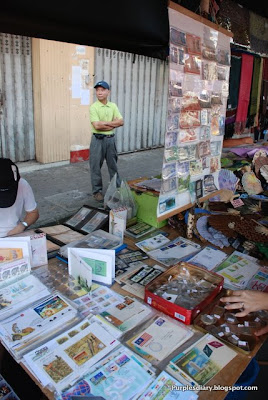 Massage by the blind. 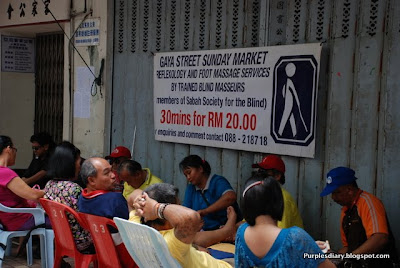 There goes my CNY of 2012 Dragon year. Blessed to be home, besides having good food nice home cooked dishes too :)
Posted by Purpledee at 9:01 PM No comments: