I had been such into online cooking recipe lately, probably due to influence of some friends who like to bake. Nah, I don't like baking as I hate the mess created by the flour. Thus, after browsing some online recipe, I would think I like to prepare desserts instead.

Remembered I was introduced to this sago dessert some time ago, can't remember when. Since I have stored a slice of organic pumpkin in my fridge, why don't I try it out. One of the CNY vegetable - pumpkin, in Mandrin is called 金瓜 (jin-kua). One must know, Chinese would like auspicious word and prosperous symbolic during CNY. Having it said to be a golden bean, believe it should be an auspicious dessert for the occasion then.

This post is extremely hot-from-the-oven. As I just made them a while ago.

What I have here is the simple version of Pumpkin Sago. They are couple others online which could have more ingredient compared to mine. 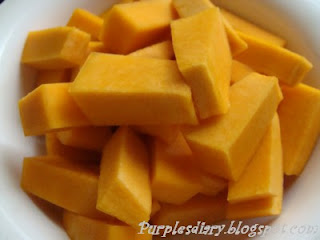 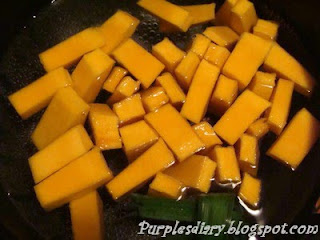 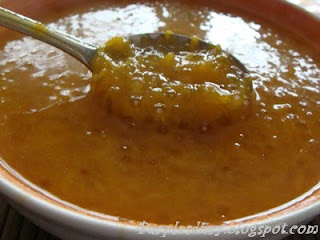 It tastes not bad though... yummy!
Posted by Purpledee at 1:13 PM

Email ThisBlogThis!Share to TwitterShare to FacebookShare to Pinterest
Tags: Recipe

Thanks for sharing! I recently tried a similar dessert at dim sum.