My mood has been spoiled lately, catching a cold which brought me sick for 2 days, plus some work surprises (negative one) around me lately. Probably it has been the hint for the start of the year. I started work on the 10th day of CNY, supposedly a good day for me. But I felt sick on the 11th and 12th day... sigh.... and I still need to juggle with work pressure, since I had been out for more than 10 days vacations, been taking calls and checking emails even when I am sick at home... what a life. Some would say how stupid I am, but who understand the amount of pressure I had , for not accomplish my tasks and causing delay to project, all sorts of shocking surprises people would give me.. anyway..

Back to the topic, introducing the Chinese Lion Dance culture in Labuan island. In which you might not see it commonly the same here in any of the town and cities of Peninsular Malaysia. We do see Lion Dance once a while here in KL, especially when there is special ocasion where large organization will hire Lion Dance to bring good luck to their business. Or probably household will specially invite Lion Dance to their house when they are having open house or so. 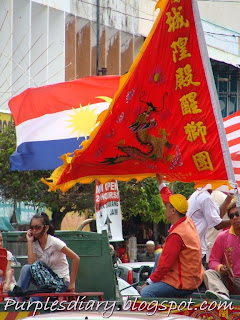 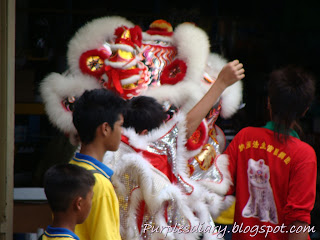 In the island of Labuan, depending on the year, we would have Lion Dance along the street, showing off their drums and Lion heads around from CNY Day 1 till Day 2 (at least), but for the case of this year 2009, we had Lion Dance on the street till Day 7 (since it was a long public holiday this year) and will resume on the Day 15 of CNY, where Chinese in Labuan will have the greatest celebration of Chap Goh Meh.

The difference ( I could see so far) is, firstly there are varieties of Lion Dance and each society or mainly temple will own at least 2 of the Lion head. Thus, they will travel in a lorry with their drums and accessories. Secondly, they will go door-to-door visit to collect for angpao, a kind of donation for their association, school, or temple. People in the island willingly donates, but there are still those who are not willing may just basically ignore the Lion's visit. Especially when they visit at the wrong timing :))

In such, this culture had made the town and even housing area has the strong "feel" of Chinese New Year. From far, a lorry carrying the team could have voice their drum even along the street. I personally feel they are so full energetic. With this had brought us all the "feel" of it. Imagining we are all banned from fireworks and firecrackers during this special occasion. Without Lion Dance's drum echoing the town and housing estate could have even brought the "feel" of the celebration out of our society. No wonder most friends will tell me, "besides 2 days of public holiday granted for us during CNY, we don't feel much of the celebration within the 15 days of it".

Presenting you a short video clip captured while I was shopping at the Market on Day 6 of CNY. Lion dance went by door-to-door of each Chinese Shop to collect angpao.

Posted by Purpledee at 4:06 PM

Email ThisBlogThis!Share to TwitterShare to FacebookShare to Pinterest
Tags: Life

Interesting. would u know how to invite them to do performance at my place?

hi there, presume ur place is in Labuan ya.. the lion dance team will normally form by some Chinese association, raising charity funds for schools and temples. Thus, you could get in contact with either the association, temples or Chinese schools personnel to specially invite them to your place. Else, on CNY days, just sit back at your place, there will be lion dance pass by your house (unless you are staying in condo/apartment). :)