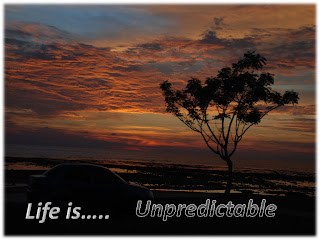 I don't usually blog emotional stuffs... but this strike into my mind while I was driving home today. Being a person who have lots and lots of analogy in mind, I could say I had a fulfill moment today. Some may think I shouldn't be an emotional person, as the person they knew is someone who don't really care what happened to the world... and yet feels good all the time. Guess that is no longer me, that was the college day me! Let's face the reality as we grow older. :(

I lately noticed life is really unpredictable. Being swept by a sad news earlier this week made me feel life can be so delicate, it could broke anytime, when we say treasure life treasure moment, we really must meant it from the heart.

Someone whom I knew couple of months back (and most of my closed colleagues do) had just passed away due to an accident. Some colleagues just saw him last week, and he was my scuba diving instructor, whom I earned my ":Open Water Diver" title 3 months back. A friend just had a small chat with me, before I left office today. She felt sad and shock from the news, and from the wake session last Tuesday, she revealed how the session was... pretty sad imagining all of those, especially to his family members, it must be a difficult time to them. Condolence is the word.

Spoken to another friend lately, on a different occasion and topic... he has this believe to share "when we say we treasure something or someone, say it truly from the heart". It's true, when you wish to love someone or something, really meant and show it in action which really meaningful to the other party, not only specifically to you yourself - which most people unintentionally did that always. Seeing something, would always thinks that is the BEST to others.

Since life is rather unpredictable. I now think I should have something meaningful planned for myself... something which I had in mind for a while but never execute it, kind of an unbelievable task and self mission after all.... :) guess what would that be???
Posted by Purpledee at 7:02 PM

Email ThisBlogThis!Share to TwitterShare to FacebookShare to Pinterest
Tags: Life